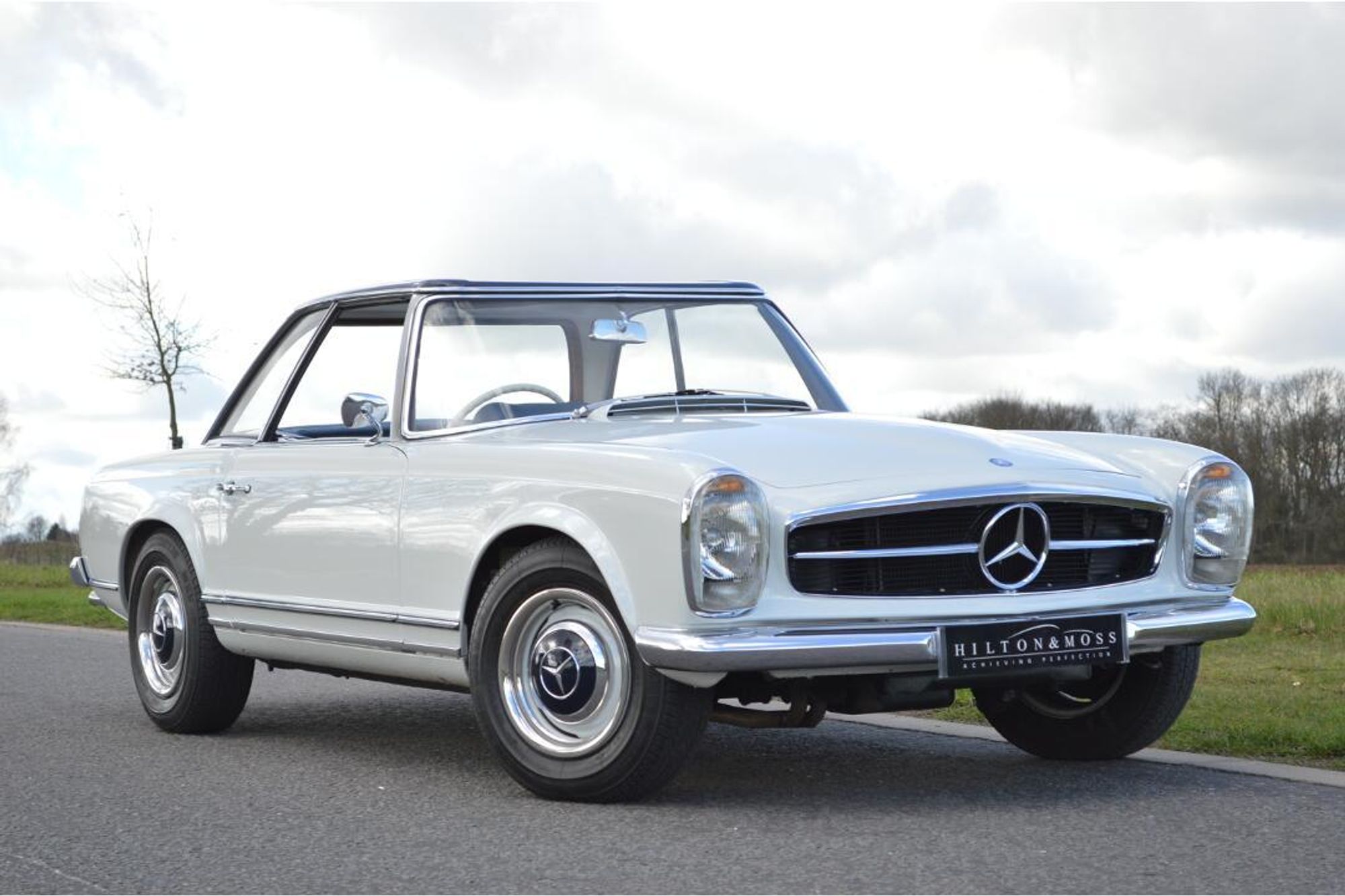 Presented in White with blue interior, this 1965 RHD Mercedes 230SL Pagoda Auto has had an extensive amount of money spent on it in recent years to maintain its excellent condition. Having had recent work completed by an acknowledged Mercedes Pagoda restorer, it has previous invoices totalling over £60k as part of the comprehensive history folder. The car has had an interesting life, having spent some time in France where it was maintained by Mercedes dealer SAGA Les Sables d’Olonne. Recent work includes an engine and gearbox rebuild, full engine bay detail, new front and rear shocks, brake overhaul, corrosion repairs carried out to the inner wings, underseal/rust proofing of the vehicle’s underbody, a respray, some re-chroming, a new hood and interior re-trim. It also benefits from a Becker retro radio having been fitted. Work done in the last two years to restore the vehicle comes nearly £40k. An excellent example of the earliest Pagoda model, in a desirable and iconic colourway. Production of the 230 SL commenced in June 1963 and ended on 5 January 1967. Its chassis was based on the W 111 sedan platform, with a reduced wheelbase by 30 cm (11.8 in), recirculating ball steering (with optional power steering), double wishbone front suspension and an independent single-joint, low-pivot swing rear-axle with transverse compensator spring. The dual-circuit brake system had front disc brakes and power-assisted rear drum brakes. The 230 SL was offered with a 4-speed manual transmission, or an optional, very responsive fluid coupled (no torque converter) 4-speed automatic transmission, which was popular for US models. From May 1966, the ZF S5-20 5-speed manual transmission was available as an additional option, which was particularly popular in Italy. Of the 19,831 230 SLs produced, less than a quarter were sold in the US. The 2,308 cc (2.3 L) M127.II inline-six engine with 150 PS (110 kW; 150 hp) and 196 N·m (145 lb·ft) torque was based on Mercedes-Benz’ venerable M180 inline-six with four main bearings and mechanical Bosch multi-port fuel injection. Mercedes-Benz made a number of modifications to boost its power, including increasing displacement from 2,197 cc (2.2 L), and using a completely new cylinder head with a higher compression ratio (9.3 vs. 8.7), enlarged valves and a modified camshaft. A fuel injection pump with six plungers instead of two was fitted, which allowed placing the nozzles in the cylinder head and “shooting” the fuel through the intake manifold and open valves directly into the combustion chambers. An optional oil-water heat exchanger was also available. Please ring Fraser on 07880 554460/01279 813907 or email sales@hiltonandmoss.com for any serious enquiries. 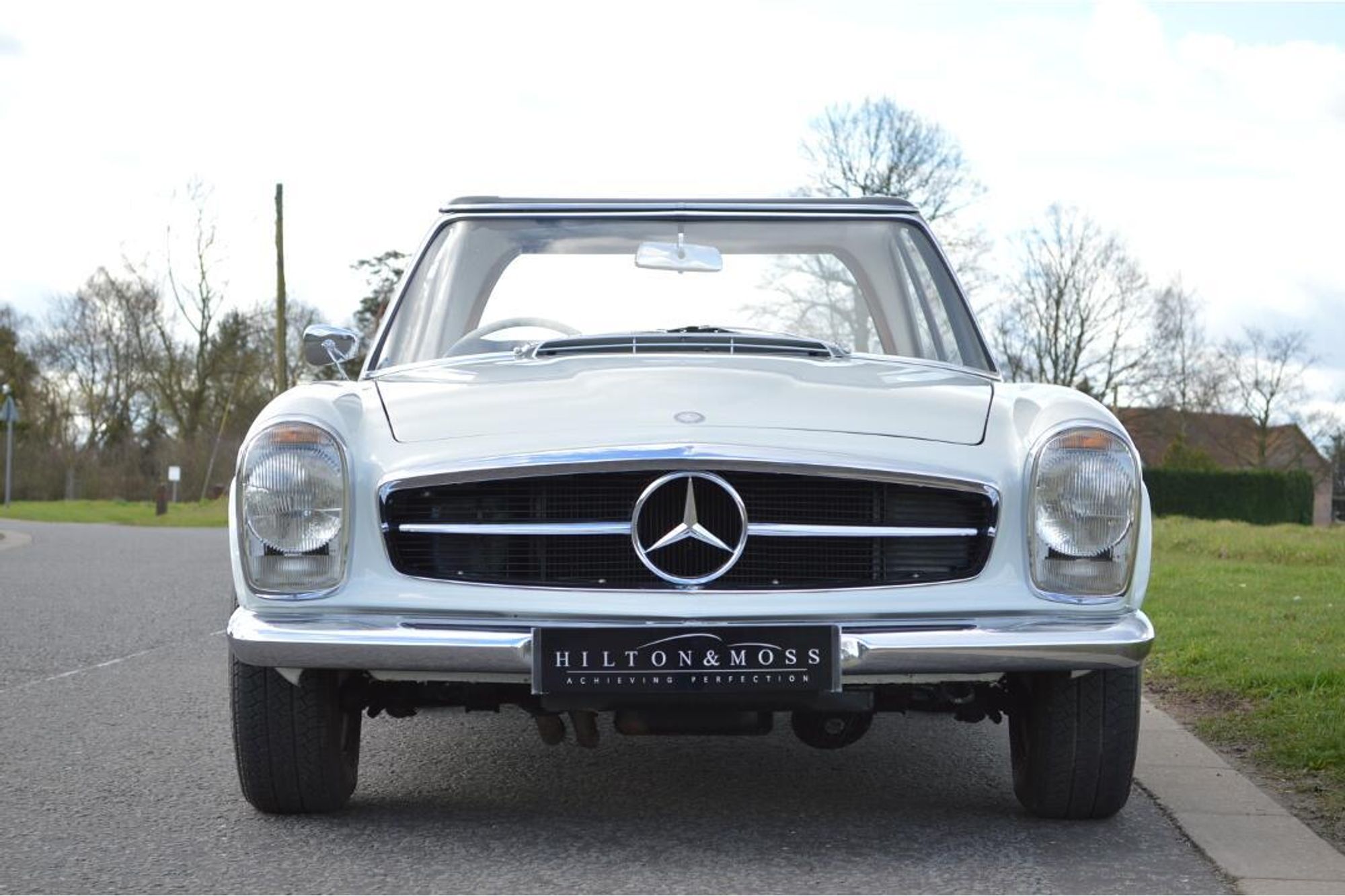 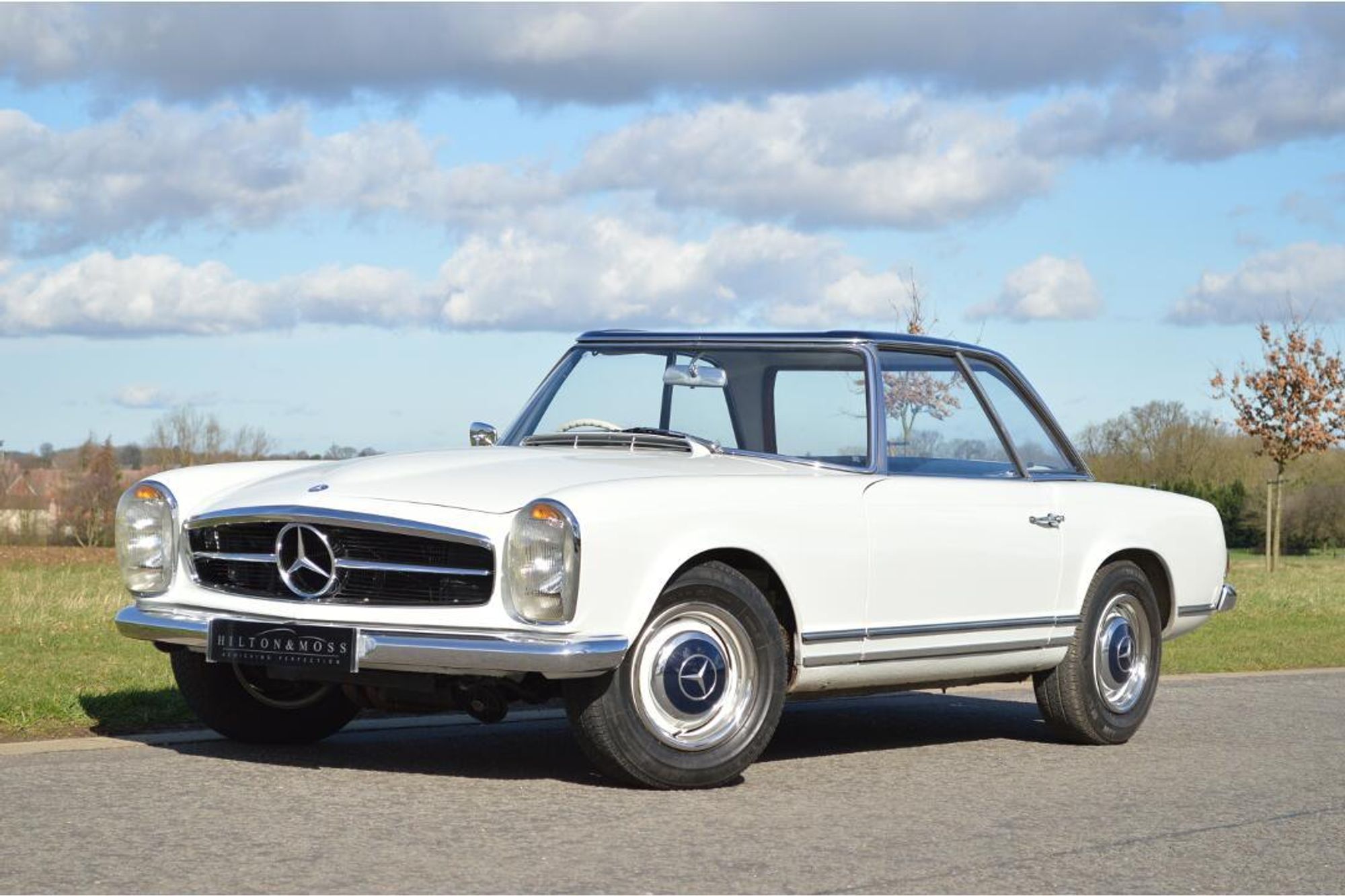 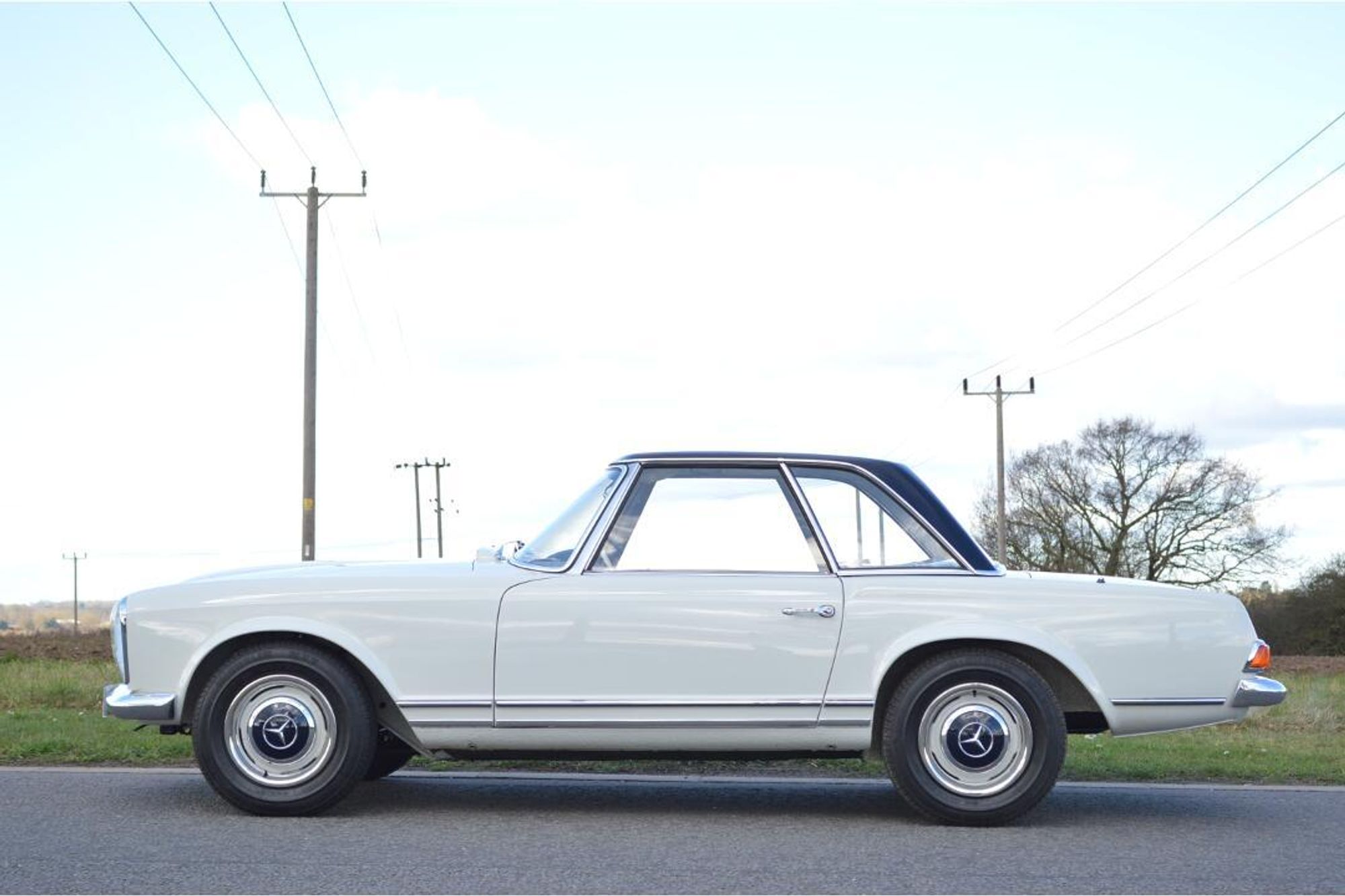 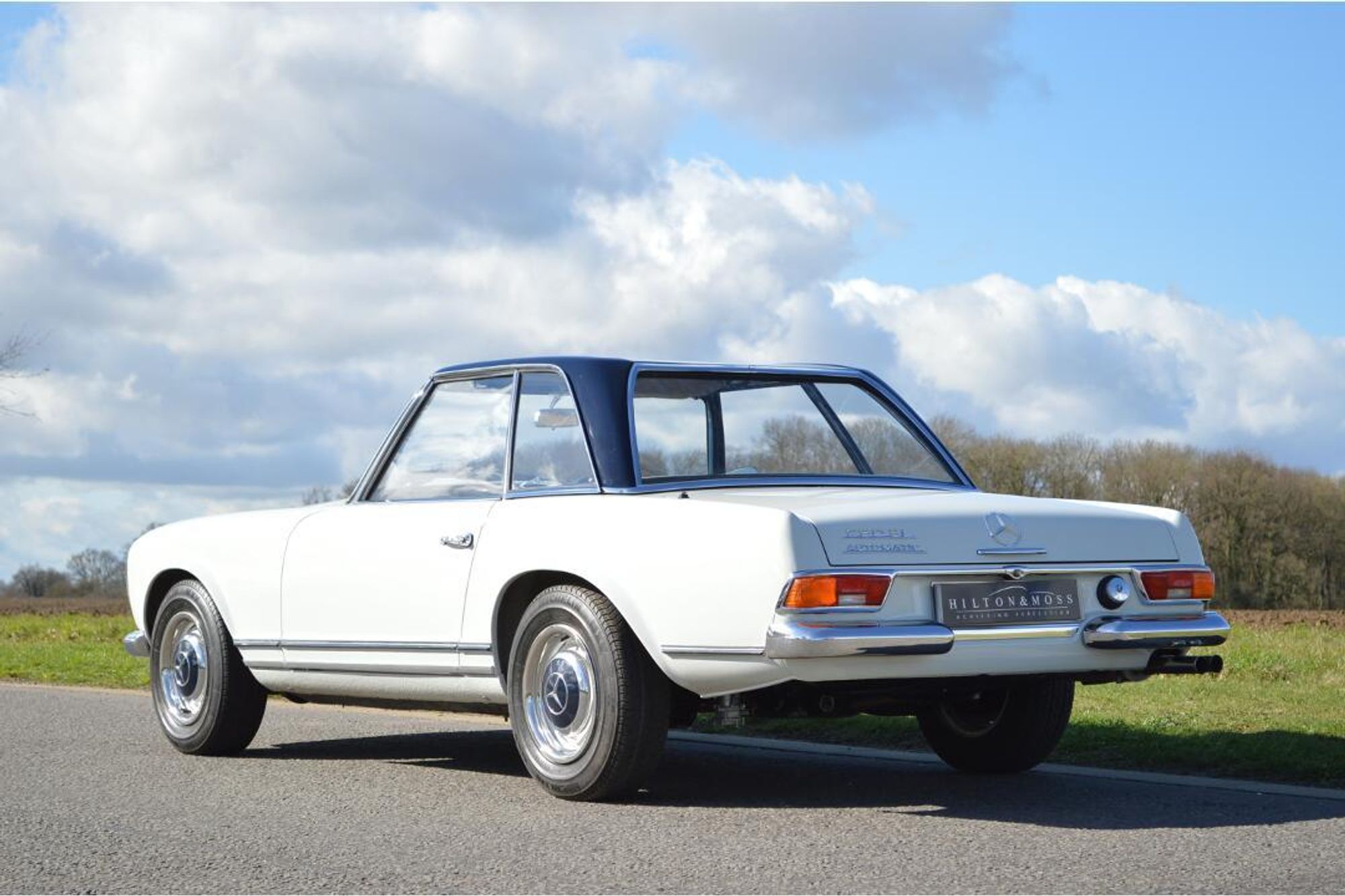 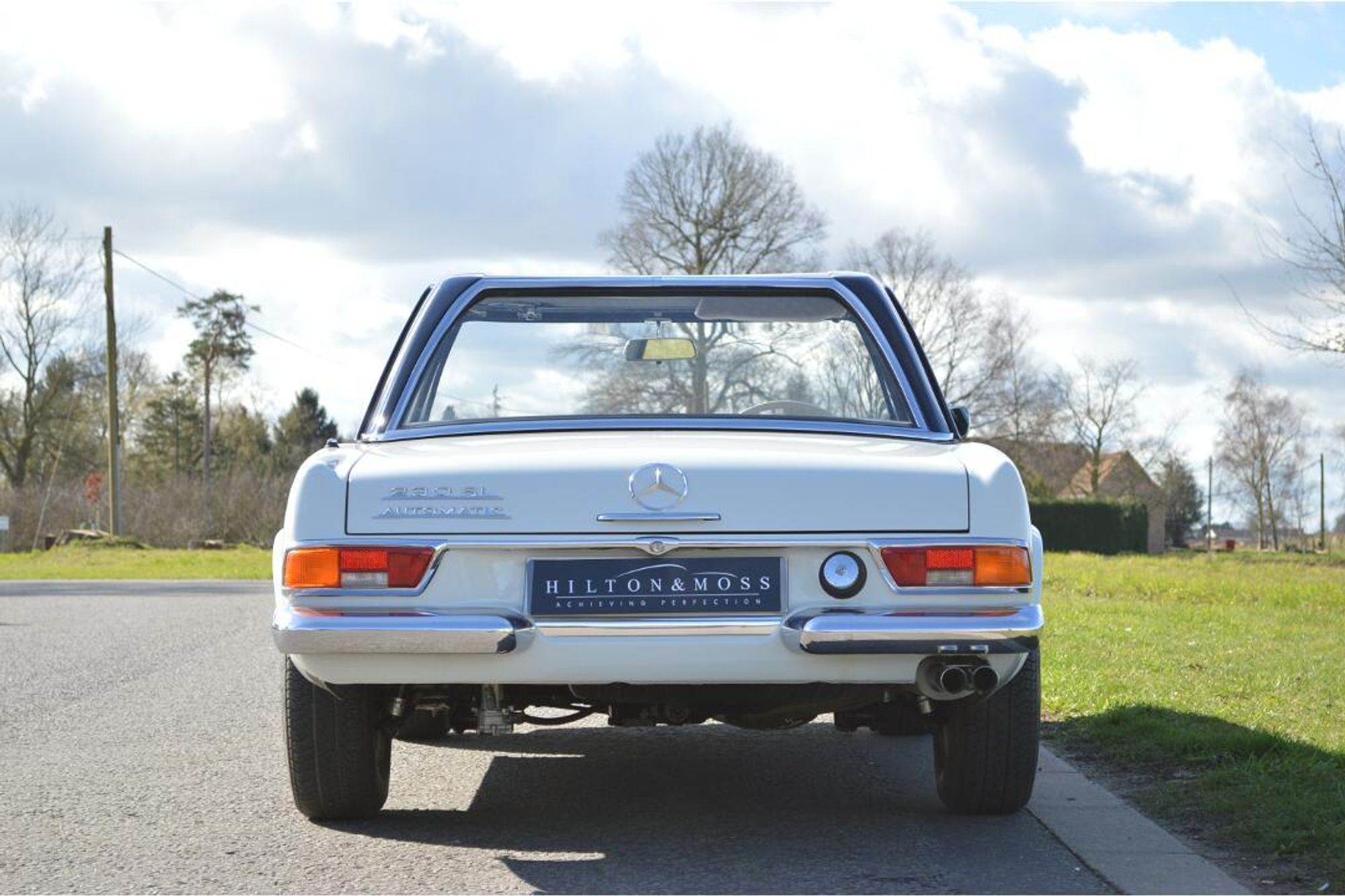 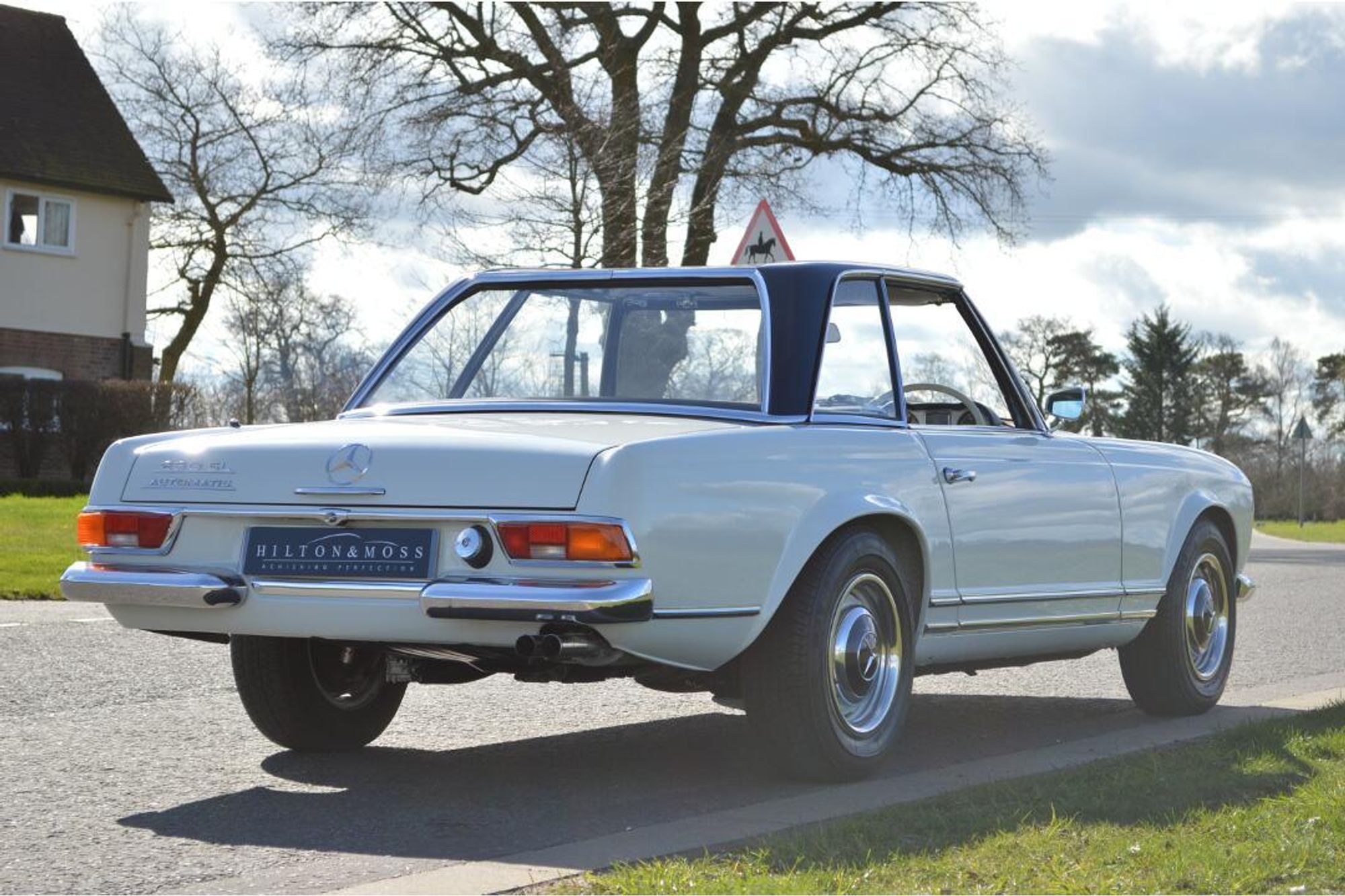 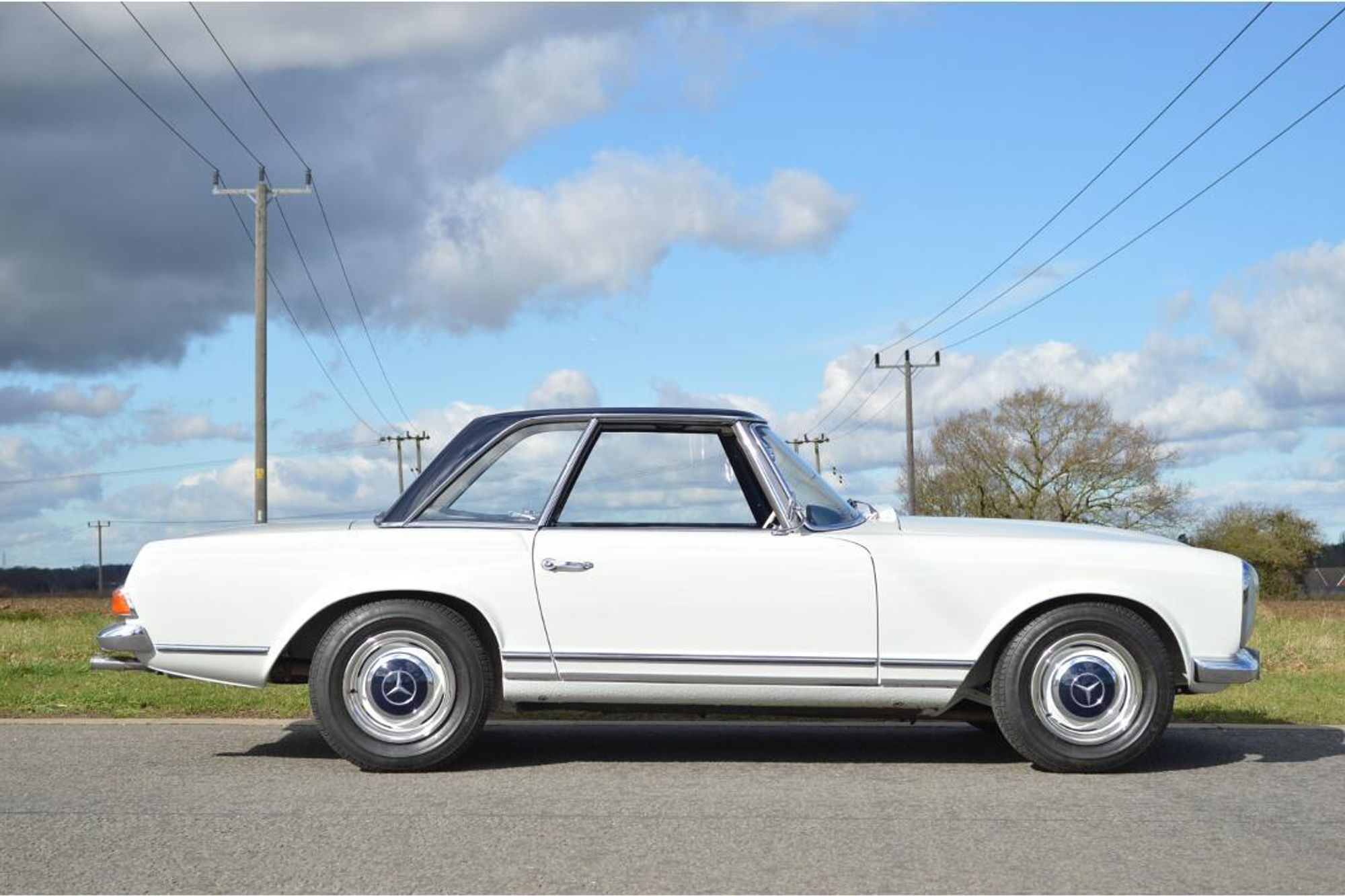 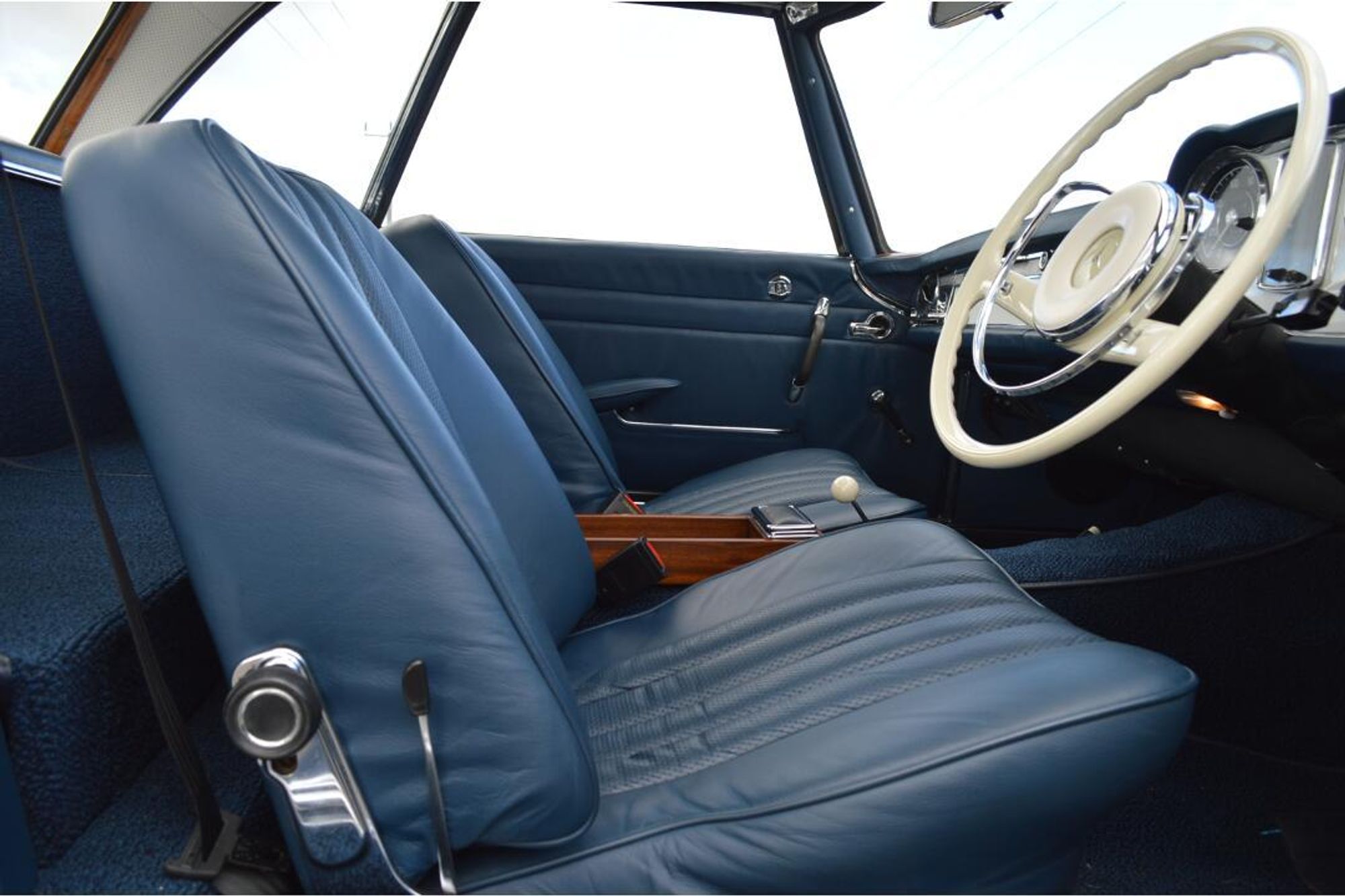 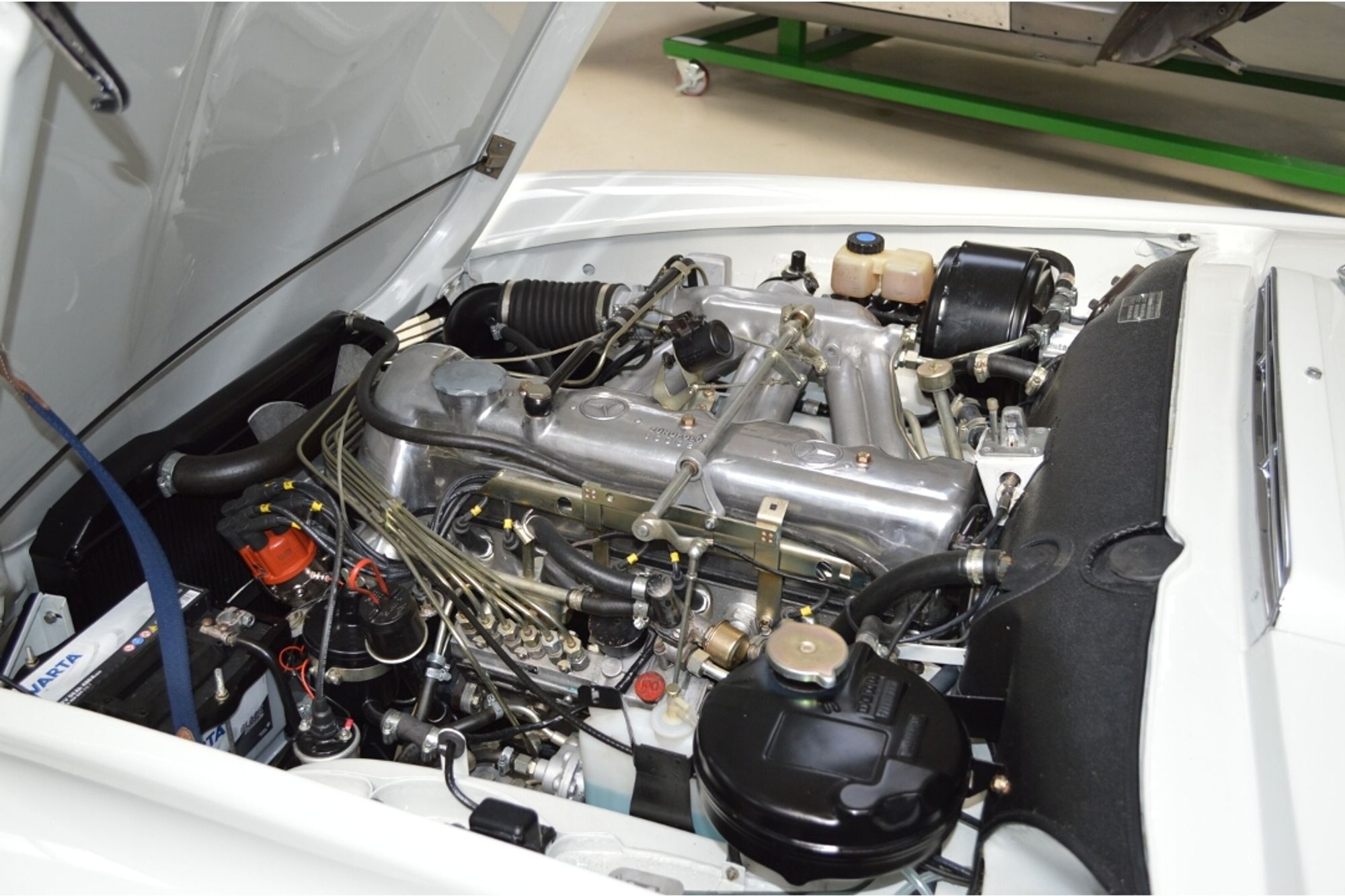 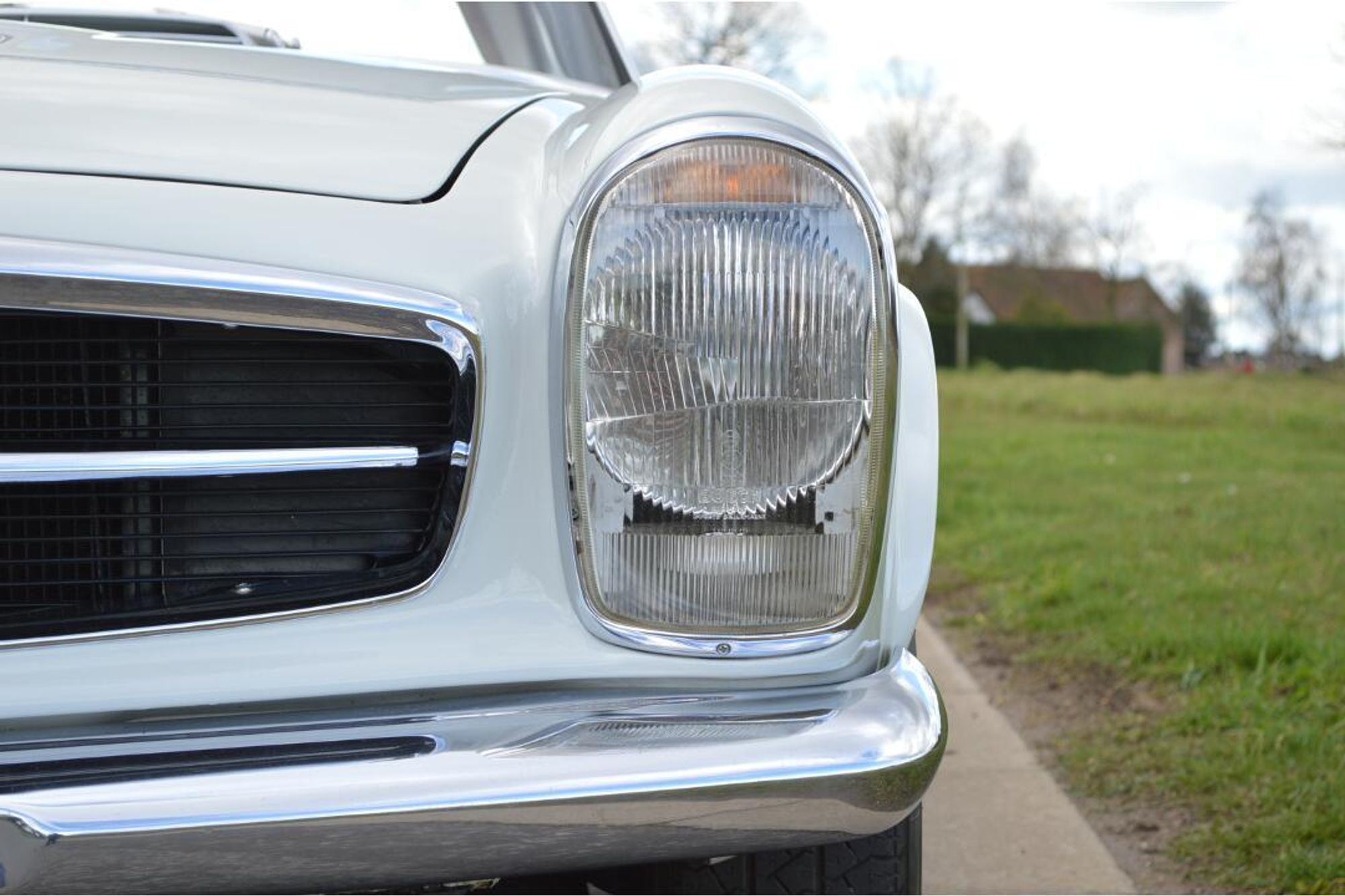 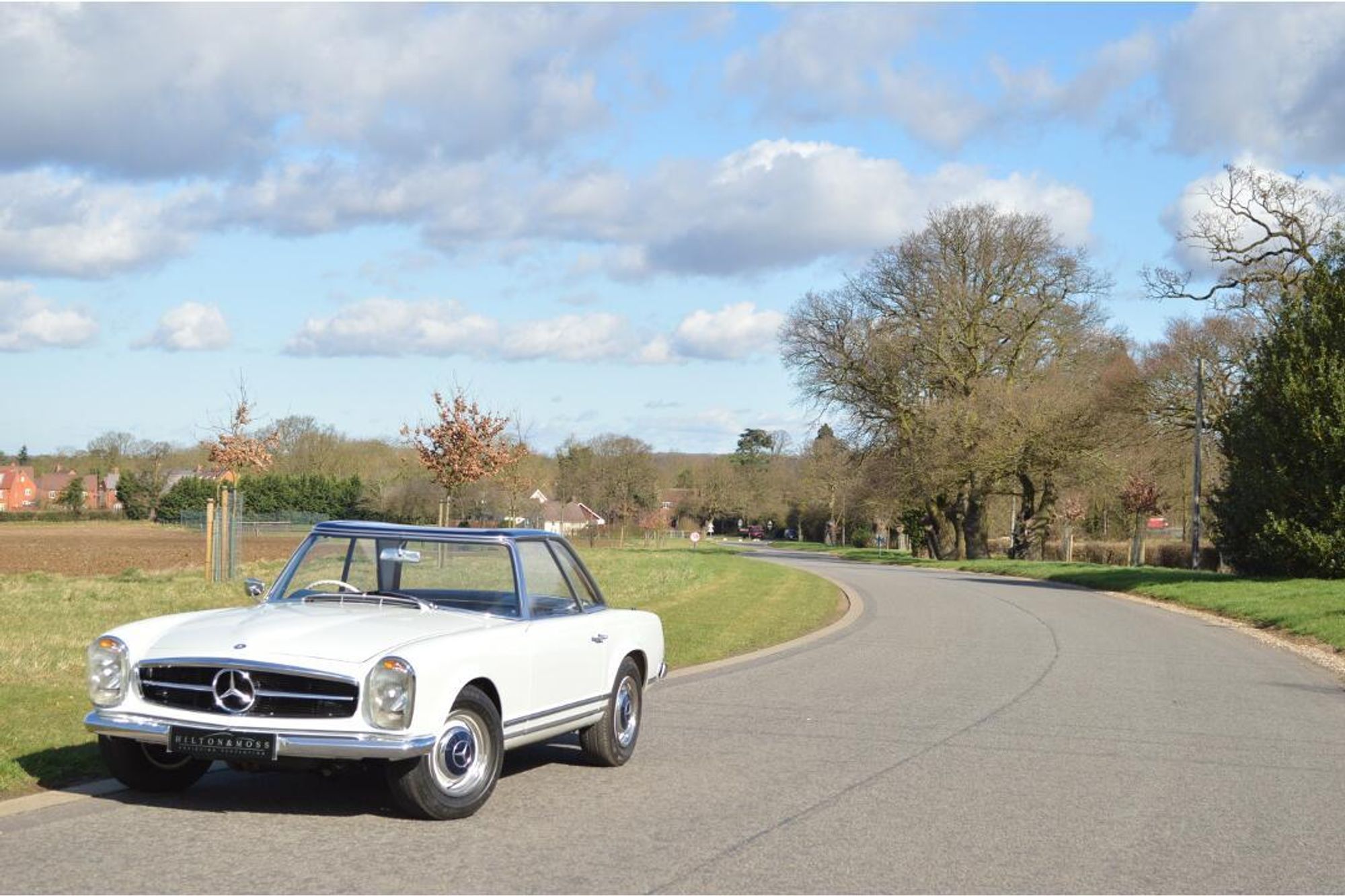